From the beginning of his career Finnur Arnar Arnarson has been particularly drawn to generic circumstances where art is displayed in a volatile state, scarcely visible at the narrow margin between art and life. Taking advantage of unaesthetic, real-life situations, experienced in absence of artistic ambience, he excelled in drawing attention to neglected pores and corners where his art was fully integrated into a perfectly commonplace ensemble. In these initial works, in the early nineties, he used to reconstitute a given moment in a series of site specific works showing an unusual daring in furthering the limits of art.

Finnur Arnar´s double-edged approach appeared as early as his career and has ever since given his works an extra dimension of contradictory nature. They can be interpreted in a certain way but that does not necessarily prove that that is what they are about altogether. Behind an obvious denotation of a general kind lies a hidden connotation of a particular nature easily opposing that which seems so obvious, most often referring to art and artistic practice in a manner which emphasizes its unusual nature as a professional activity.

Although it may be harmless to leave a work unfinished in any other profession, an artists must not be caught off guard as an ordinary worker. Every move demands a perfection, which excludes absence on behalf of the technicians responsible for the exhibition. Yet, in all the anarchy which appears to reign throughout the exhibition the atmosphere is as if it were the artist´s solemn wish to eschew all the formal rules of a traditional exhibition bien faite. The comparison between an ordinary working place and the gallery turns into a conflicting and slightly melancholic envy of commonplace freedom, not that the upside down disorder would ever be considered better or more beautiful than the artistic orderliness, but because it is truer to life, where proper arrangement is inexistant. Unlike aesthetic orderliness which pleases the common eye uncouth chaos happens to be the artist´s neverending source of inspiration.

The speculation of time and experience resulting from Finnur Arnar´s discovery of the creative forces of natural and cultural disarray has found a place in recent video installations.With the advent of the video projection autobiographical sketches have become more frequent, although it would be erroneous to interpret them too literally. Despite the role he assumes as a male and father facing the contemporary crisis of masculinity, there are deeper and far more inveterate concerns in Finnur Arnar´s melancholic description of his hero´s daily existence.

There is ample reason to see in Finnur Arnar´s works from the new milennium the extension of the male crisis comprising the general crisis of nature, or rather man´s cultural crisis reflected in the global degradation of our natural environment. As his art evolves it becomes ever more evident how closely Finnur Arnar associates our dwindling spontaneity, perceptual frigidity and loss of innate boldness – all retreating instincts in contemporary culture – with man´s alienation from nature. It is a major feat of Finnur Arnar how through relatively simple means he has been able to rekindle the pertinence of Sigmund Freud´s lucid questioning of Civilization and its Discontent, from 1930, echoing Gauguin´s late masterpiece from 1897, Where Do We Come From? What Are We? Where Are We Heading?
Halldór Björn Runólfsson 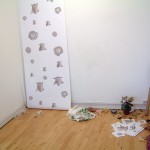