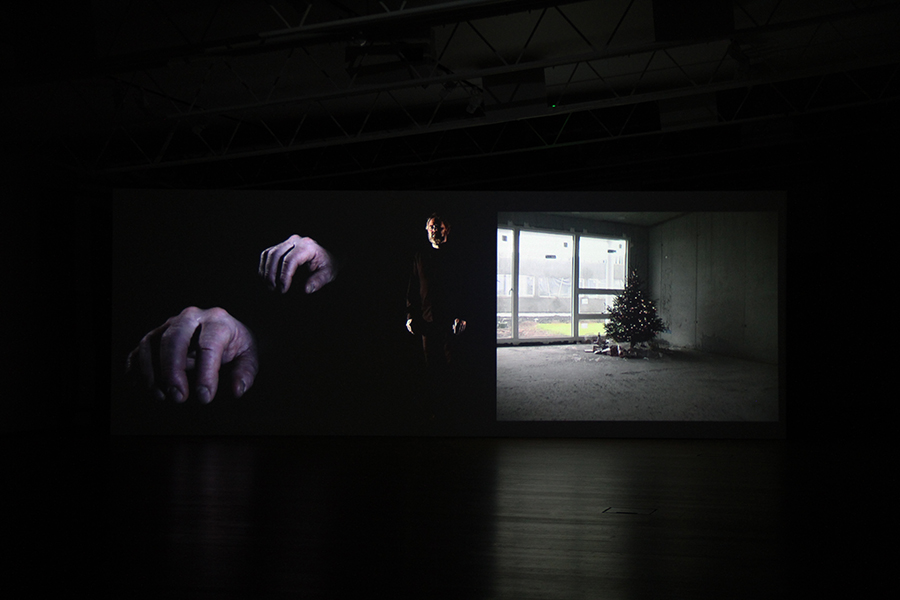 Like so many of Finnur Arnar ́s video pieces Journey uses double images to underscore a conceptual whole. Fragments, shown in a loop, feature a walking man dragging along a fisherman`s gaff; another set of fragments are taken up with a man slowly revolving around himself, he ́s clearly the artist. Untouchable money floats in mid air. Fingers beat out a rhythm on a table; all around there are the ragged remains of Christmas past. The artist puts together a set of open-ended symbols. He pulls us, the viewers, into the centre of the piece; much like the revolving man we are placed between images, having to turn this way and that to look at them. What is he thinking, the man who revolves in the whirlwind of money or in the the detritus of a Christmas extravaganza, or the man who waits, drumming with his fingers on a table? Or the fisherman on his neverending journey, holding on to his gaff?

Journey poses questions of some urgency, centering on our humanity. They have to do with the meaning of our lives, our values and our pursuit of happiness. There are no answers to them except the ones we discover within ourselves and these answers may be subject to change. Through its conceptual scale and weighty presence, as well as through its insistent rhythm, Journey is a powerful work. Where is this journey taking us? 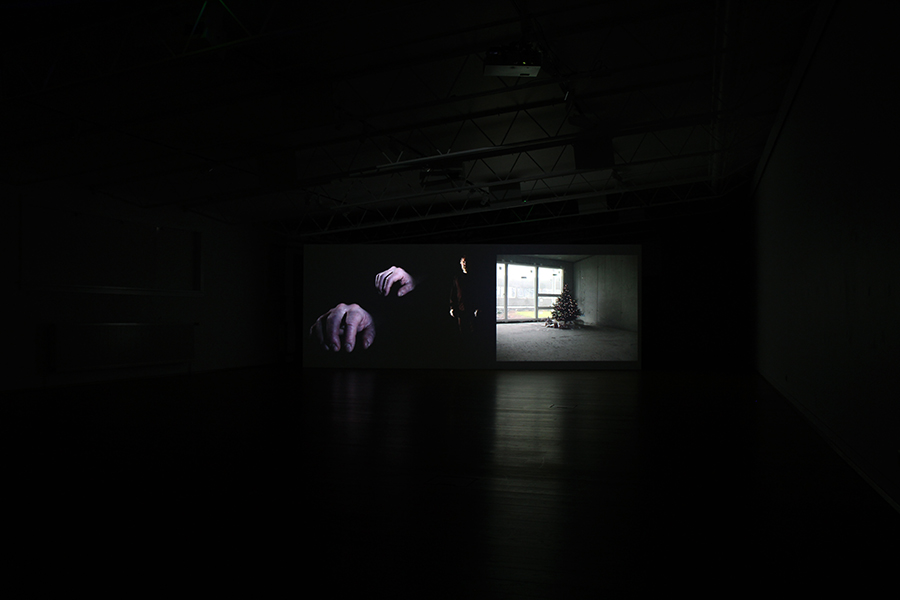 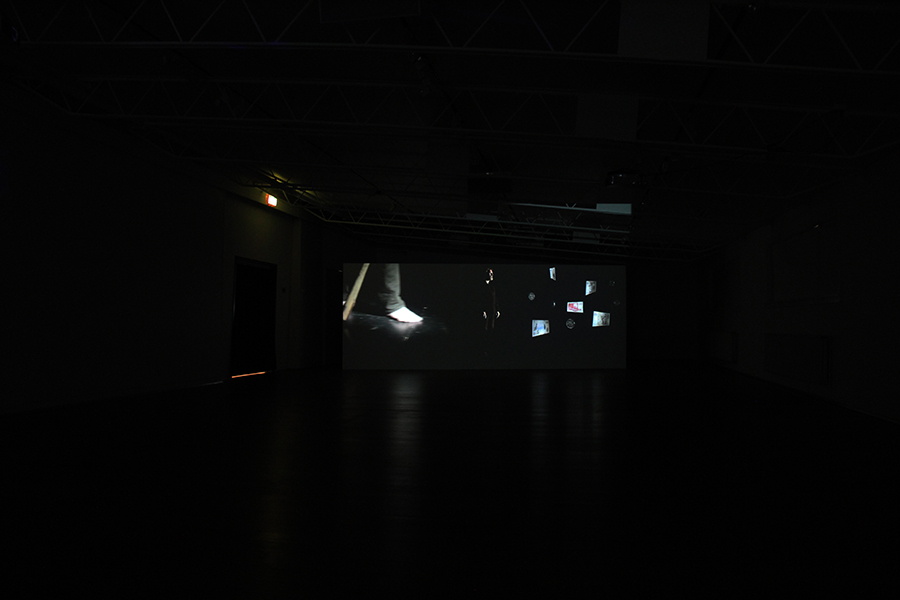 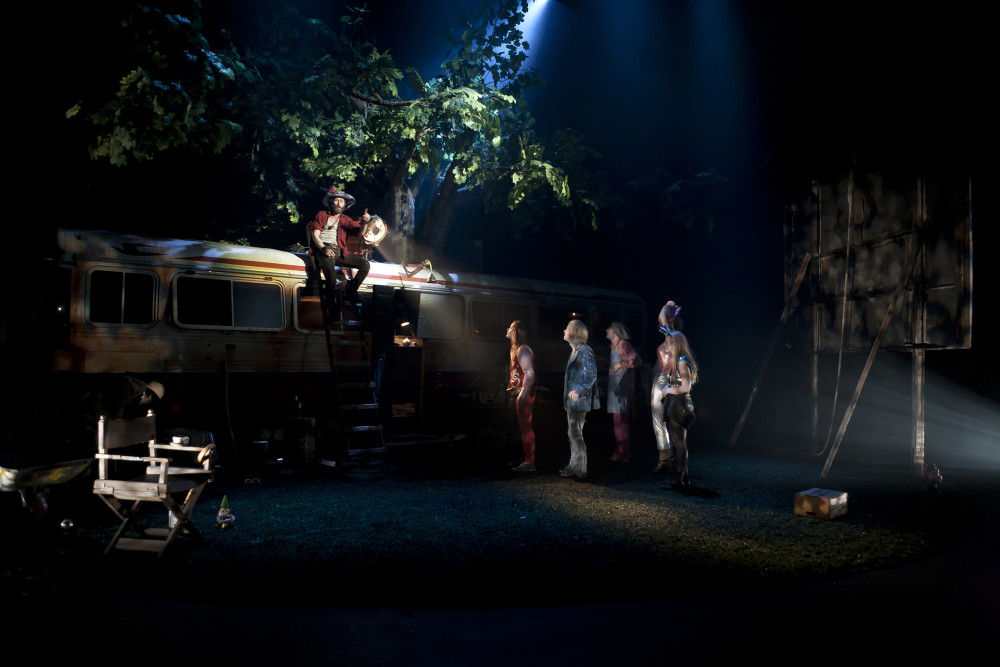 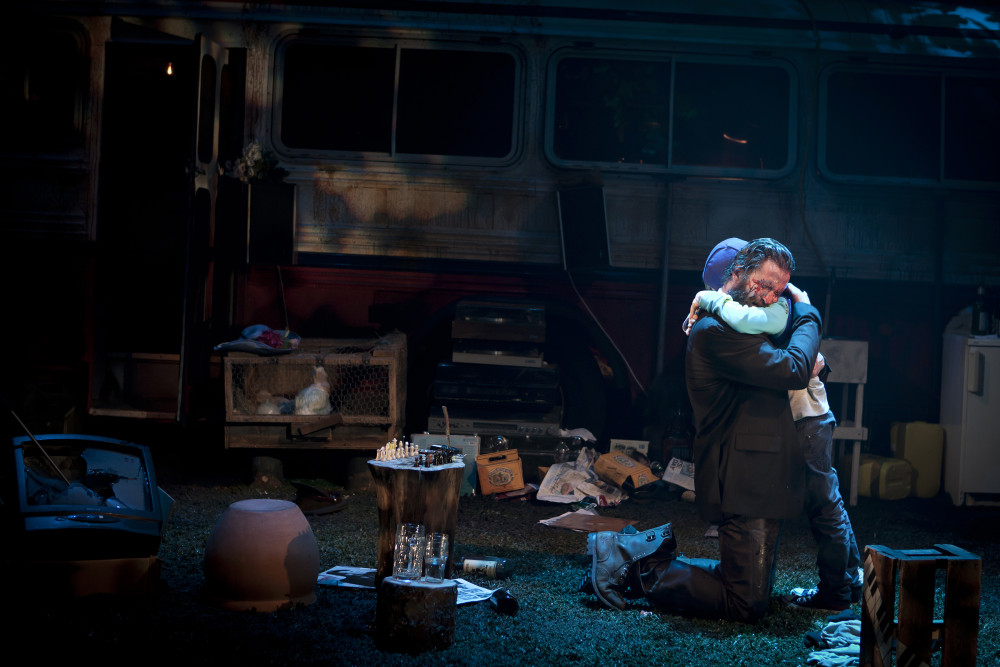 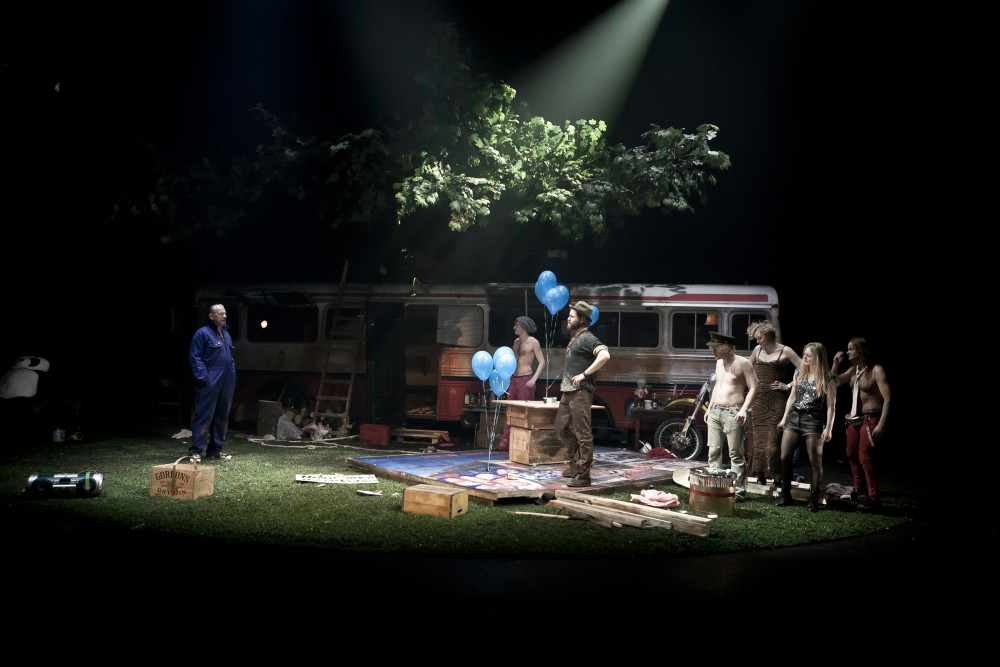 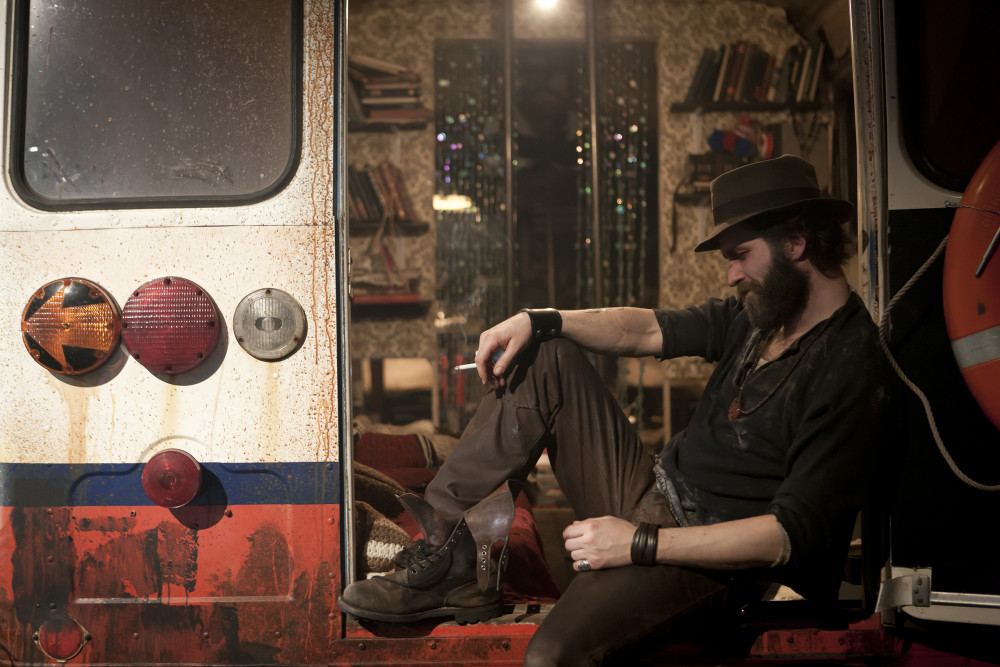 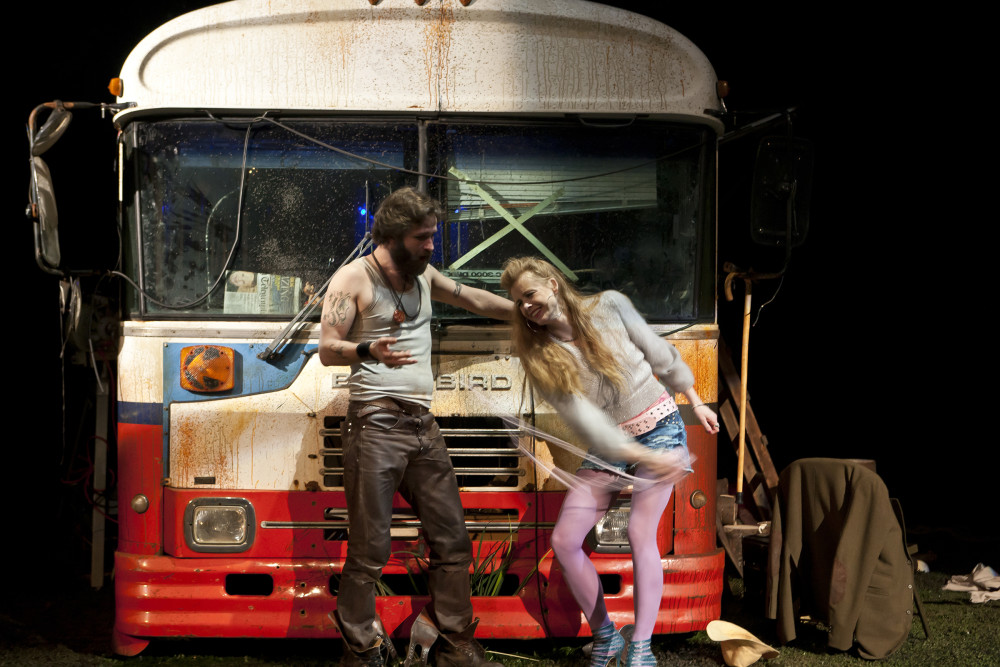 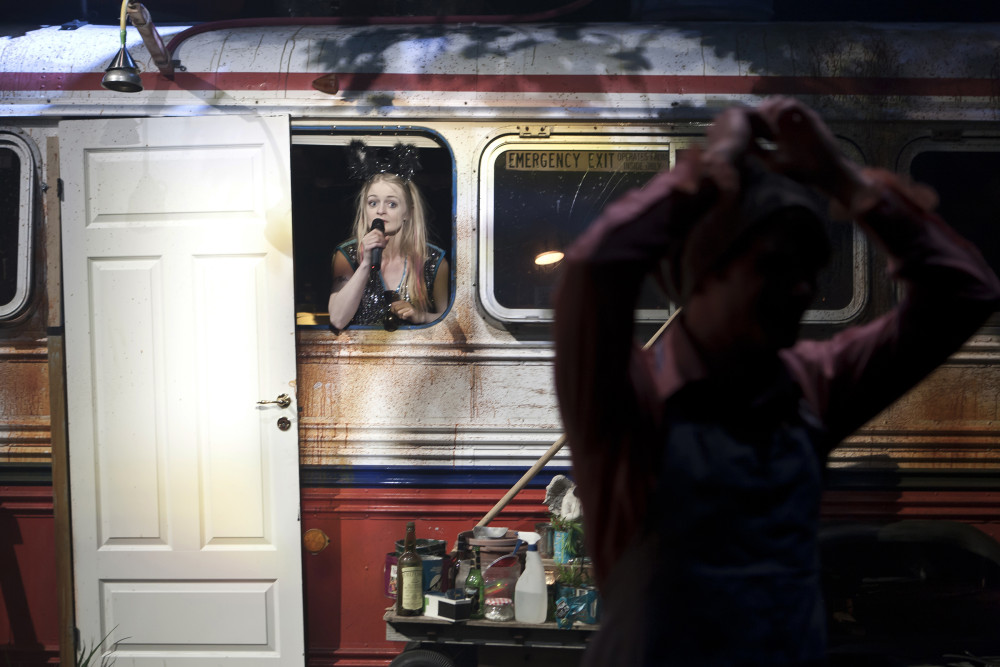 From the start of his career, Finnur Arnar has taken his subjects from the familiar reality that is sometimes called the everyday. His works have evolved from being relatively realistic – in the form of installations, photographs and texts – towards videos that present a dreamlike, open view of Icelandic nature, and at the same time the nature within us.

Finnur Arnar is a storyteller. The male image has been one of his major themes over the years and his works which depict the male apparently contemplating his role are unparalleled in the Icelandic art world. The narrative technique in these works, which often combine image and text, is a personal one, but also derives its form from international art movements, in particular 20th century concept art. Finnur Arnar’s realism can be linked to the American artist Richard Prince, who also represents – albeit in a different way – everyday archetypes in his works. The texts and installations that Finnur Arnar makes also call to mind the work of the Russian Ilya Kabakov, who tells tales of ordinary people in his art, incorporated into a realistic framework.

Installations, photographs and texts are works that freeze the moment – but Finnur Arnar’s art reached the point where the moment became fluid, and in his videos time is an important component. The stories are still told, but now with the help of light, time and motion. Finnur Arnar has made quite a number of works with a similar construction, a twenty-minute real-time recording shown on two surfaces simultaneously, so that both times are seen at once. The video changes from showing a simple process to a more complex work in which real time is overcome and the time of the work is out of synch with the time of the spectator. Accordingly, the work does not involve the spectator waiting for what will happen next, he can see it already and absorb himself in other elements of the work. As before, the theme is man and the masculine image, but nature has become increasingly predominant, more and more often in the role of similes and symbols. Sometimes man is alone on the horizon, in the romantic vein, but more often than not Finnur Arnar represents the relationship between man and nature. Photographs of clouds and shadows portray types of weather and light that we recognise, but at the same time the works arouse the spectator’s emotions, perhaps reflecting life’s own light and shadows. A video showing a sleeping child and birds in flight – is this the sleeper’s dream, is nature our inner force?